The Road to Success starts with Humble Beginnings

“Be Passionate, Believe in Yourself and You will Be Successful.”

Sounds easy enough... but in real life, the road to success isn’t all sunsets and smiles. Quite the contrary actually! During a start-up, I guarantee you will not see your most glamorous days ever. (I’m speaking from experience here BTW! I’m very tempted to show you a photo of me grinding out in front of a computer after 12+ hours of being in the zone, while still in my pajamas from the night before, office surrounded by toys [my kids seem to take over everything], and power bar wrappers and empty cups blocking the bottom half of my screen which forces me to raise up my monitor with client annual reports. Cleaning might have been an easier solution in after thought.)

As tempting as it is to share such an intimate pic with you folks, I won’t because I need to maintain this glamorous social media persona I have worked so hard to conjure up over the last few years 😉 But I will show you…

Ta da! My desktop. This is half of where the magic happens, I have another monitor on the right.  (If you are wondering where my cups are, my mom took them… yes, all of them. And yes, my mom still cleans up after me): 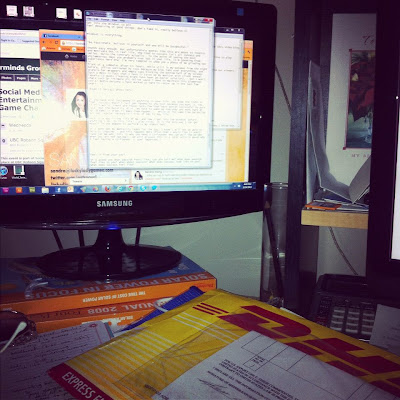 Not that impressive I know, but I guess what I want to show is that it doesn’t take a lot of over-head or gear these days to do an internet start-up. Everything including your daily meetings, servers, testing, storage, work-flow, banking etc., can all be done online.

Here are some humble beginnings of some amazing companies you might have heard of:

Apple:  Back in 1976, Steve Jobs, Steve Wozniack and Ronald Wayne started a business out of a garage in Cupertino, CA, putting together one of the first prototypes of a personal computer. They are one of the most recognized brands in the world and of course make billions.

Google: Back in 1998, the search engine giant started out in a garage in Menlo Park, CA. For five months, Google’s first three staff would work out of this garage, perfecting their search algorithm, indexing web pages, and all that good stuff. Within a year they changed the future of search engines forever.

Mattel: Back in 1940′s in a Southern California garage,  Ruth Handler started by making picture frames. To reduce waste, Handler using the scraps of wood from those frames to make doll furniture, a pivot which proved quite successful so gears were switched to toy making. 1959, the first Barbie was introduced and now Mattel lines include Fisher Price, Hot Wheels and American Girl.

Disney: Walt Disney’s first studio was a tiny, one car garage in Hollywood. There he hustled by taking on any animation work he could get while waiting to see if his Alice in Wonderland pilot would be picked up by any major distributors. It was… and the rest is history. 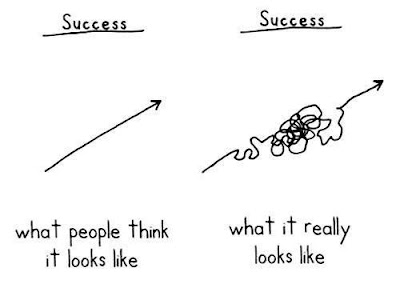 If you have ever succeeded in anything, you know the graphic above is truth. Ever notice how successful people have this formula for winning, not just one aspect of their life, but across many facets? It is because the formula for success once figured out, is very similar from one context to another. Simply mimic the pattern, and you will most likely see similar results. The pattern of success for me consists of vision, mindset, attitude, preparation, milestones, opportunity, luck, exit.

How do you get more lucky? I have been pondering this point for quite some time now and the best answer I could come up with is that luck can be created/enhanced simply by being ready for opportunities that arise – making it seem like you are more ‘lucky’ due to having more chances to win. 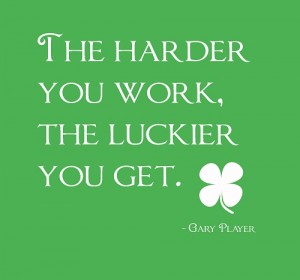 You can never have enough luck!

The road to success and the road to failure are almost exactly the same. Colin R. Davis