The video game generation (Born in the 70s/80s) has grown up. I bet if you aren’t making them like us, you are still playing them… as much as possible. It’s hard to deny that video games haven’t had a big impact in all of our lives or played a big part in shaping how we are today. I know for me personally; puzzle solving, competition, socialization and the way I always try to achieve the ‘next level’ has definitely been enhanced by game playing.

If anyone would have told me when I was a teenager that I would one day be making games, I’d say… “Yeah, that’s cool!” and I still think it’s cool. I guess I haven’t changed that much. I remember when I was 17 playing Blizzard’s Warcraft 2 all day and night wishing I didn’t have to go to school on Monday so I could keep playing. My dedication to gaming still stayed…

What got me thinking about the video game past today is our CTO, Benson Wong (my brother), was looking for the tripod (so I can start video blogging) and ended up stumbling upon a floppy disk (yes, a floppy disk!) of a game he programmed back in 1997. We don’t even have a computer with a floppy disk drive anymore and in all hopes of retrieving the data off this disk, Ben went in search of a computer with an “a:” drive. Ben says… “Burnaby library had a 3.5” floppy disk drive. I managed to pull off my 1996 BBS Door game and released it on github. Can’t believe this code is more than 17 years old … “

To view Ben’s code from 17 years ago… visit: https://github.com/mostlygeek/dominion

Pretty cool how after all this time, Ben’s still coding games…! As you can tell, Im one proud sister… plus he fixed my toilet today and found the tri-pod, so he gets extra +5 best-brother-ever points too!

How the love of games started

Ben begged our mom for the NES (Nintendo Entertainment System). We grew up in a low income household in a small town, so I do remember it being quite expensive at the time. Lucky for us though, our mom always made it happen when we really wanted something though (thanks mom!)  and we got the complete triple game pack which included the games Super Mario Bros, Duck Hunt and Track & Field (oh yeah, the Power Pad!). It was 1985.

I can still remember opening this box and taking out that big white Styrofoam. Must have really been a big deal as it was 25 years ago now. 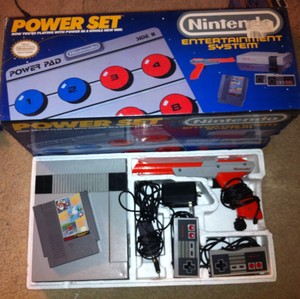 I also remember very clearly when Super Mario 3 game came out it cost $70. Wow, the price of console games has never changed in 25 years? That’s kind of weird actually. No wonder they are a dying platform… amongst other reasons of course.

Talking about consoles, check this out. Pretty cool right? 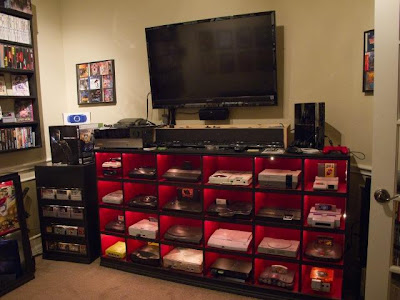 Notable consoles of my life:

Intellivision: Created the year I was born.

Sega: Only the cool kids had Sega right?

Super NES: Turnips, clouds & music that still gives me insomnia. (Did you know that if you have insomnia, 70% chance you might be afraid of the dark? – Gombas are kinda creepy?)

Playstation: Only the cool kids had PlayStation right?

Dreamcast: Damn, Fantasy Star Online owes me 3 months of my life back! Stupid system crashed and lost my character. I think it was the first time I ever cried about a video game character. Luckily my boyfriend was very understanding. That was a rough time for me.

Gamecube: That blocky thing. Has a pretty cool built-in handle for carrying though.

Ouya: Anything that involves open-source technology & a mobile operating system gets me really excited!