Ivey Poker has a Beta Launched on Facebook July 2013

It’s no secret that I, like the rest of the poker world, am in love with Phil Ivey! (or Maybe it’s just me :). 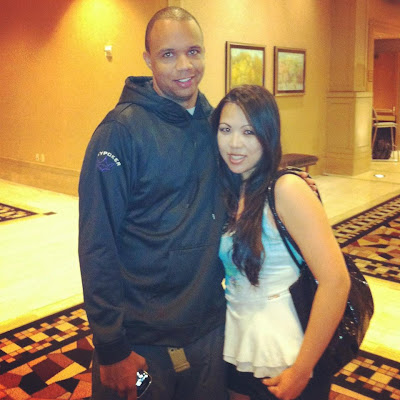 Here is my shameless photo opp. with the man himself at WSOP 2013. (Yes, I stuttered when I saw him but happy that I didn’t drool). Im clearly a huge fan of Ivey just not so much one of his app – Ivey Poker.

When I first heard from industry insiders back in late 2011 that Phil Ivey was launching some secret poker product that included the free2play model, poker training and tonnes of pros I was obviously very intrigued.

I immediately envisioned this beautiful, high-end, super classy poker room with the coolest gaming innovation, state of the art technology and never-before seen user experience. I pictured a luxurious VIP points program, soft plushy couches with tables covered with champagne flutes and me sitting in a jet plane playing open-face chinese with Ivey himself…

My bubble however was recently burst with a BETA banner that reads…‘Play like the Ivey Pros’ splashed across a designed interface by someone who may be color-blind and a web designer from the early 1990s. I couldn’t get past the web safe magentas, the unappealing mis-matched stock buttons, inconsistent fonts, annoyingly cramped play tables… etc.

Instead of champagne, I got a luke warm can of beer that has been sitting in the sun too long.
With so much potential in the Ivey name, I was disappointed to say the least and it left me unsatisfied & yearning for more.

Being such a big fan of Ivey, my expectations were set high and I was expecting everything he does to be top shelf. Or simply, maybe Im just not the right clientele? But then if Im not the clientele who is? I love poker… I want to get better at poker… Im always on Facebook… I want to play poker with Phil Ivey. I seem to be the target profile…I don’t know.

Other reviewers and industry experts that I have discussed this prior to my post pretty much was on the same page. Unlike me however, they were less dramatic ‘In Ivey Poker’s defense, it’s their beta…’

I would love to give Ivey Poker the defense that this is a ‘Beta’ and they have released a product to test the market response but I don’t think it gets this defense because this shouldn’t have been your average startup! This is Phil Ivey… it’s been 2 years in the making! If I was his PR agent / Business Consultant / Designer, my advice would clearly be “Make your first impression a lasting one. Launch something that will blow the socks off all your competitors… and then keep the surprises coming! Don’t just launch a bad rendition of Zynga’s ever popular Texas Hold’em and have it not even be as good.

Though what does make sense is that Ivey Poker wanted to stay ‘Lean’ by simply reskinning their early software acquisition of Leggo Poker & just wanted to launch asap. The 2 year dev. cycle is a bit confusing though.

(EG. Fresh Deck Poker wow’d me although Im not sure if the artwork actually effects ROI positively or if it is simply cosmetically pleasing…it currently sits with 100,000 MAU)

Ivey Poker gets some points for having training videos, but lose more for not integrating it well into the actual game design. The lack of innovation makes me upset, but not as upset as the interface design. (By innovation I don’t mean reinvent poker, but adding creativity to the way the material is presented). Here are some of my initial thoughts on what I think of Ivey poker in no particular order:

An interesting video by Mike Sexton on: Do people play poker the same when there is no real money invested?

Overall, I believe that Ivey Poker is a forward movement for the poker industry as a whole on social networks and for this reason alone, I am a supporter of Ivey Poker. Sure the product is far from perfect, but the foundation definitely has heart.

I am excited to see how Ivey Poker will develop over the next few months/years when the site has 100k+ users funneled in, player data has been collected and it’s on-going pro support/content build.

This is an exciting time for Phil Ivey, and I respect the fact that he is not afraid to jump into unknown territory head first. With great risk comes great reward, and in this industry there is no secret sauce to what the market responds to. If anyone can take on Zynga and then PokerStars, it might as well be the one and only… Mr.Phil Ivey.

You can also find me on Twitter @astrogurl or @luckyladygames.